Dom hesitated, distracted by a loud whiz and twang near his head, followed by a roar from the direction of the house.  He ducked, caught John’s eye and shouted, “Run!” 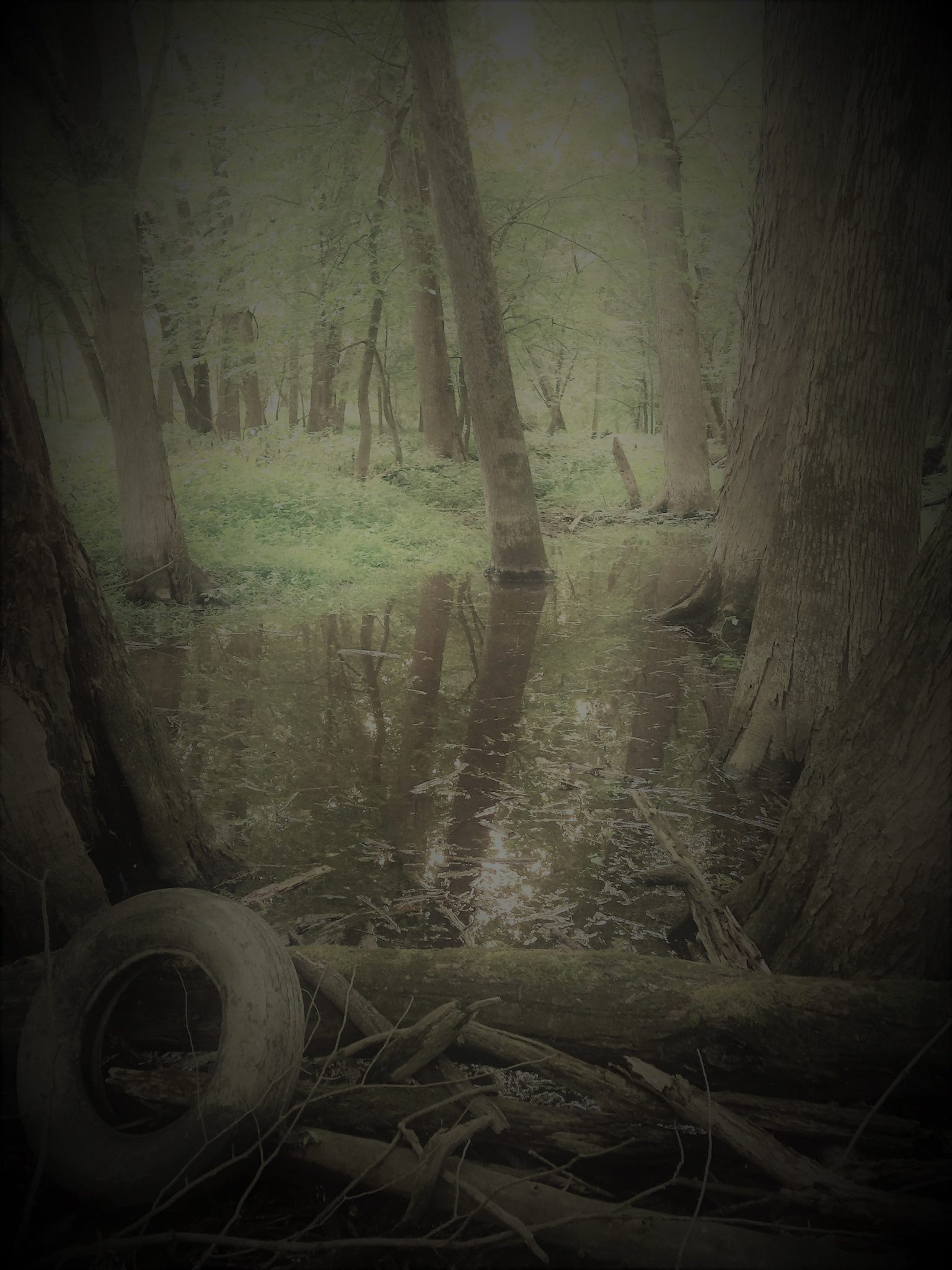 (Jump to: Chapter One. Chapter Two.)

The hangar door stood open when they arrived, and John walked in, found Fred polishing the windows of his airplane.  “Hey, Fred.  You got an extra quart of oil I could buy?”

Dom walked up to Fred, shook his hand, and complimented the airplane’s paint.

“Thanks!  I guess they did a pretty good job.”

“Will you do the interior, too?”

Dom nodded his approval, stepped out from under the wing and stretched his back, taking in the miscellany hung on the walls.  “You had a part left over!” he said lightly.

“Ah, that’s fortunate.  Well, it’s good to meet you, Fred.”  Dom turned, wandered slowly along the wall, paused to look at a large, neatly coiled hose hanging by some string, then stepped back into the sunshine.

John returned from the back of the hangar, a bottle of oil in his hand.  He caught Fred’s eye as he walked by and waved a ten-dollar bill, tucked it under a screwdriver on Fred’s workbench.

As John emerged from the hangar, Dom was brushing his hand over the trunk of Fred’s car.  Dom looked up, put a finger to his lips, and they walked toward his airplane in silence.

“Well, did you see what you wanted to see?” John’s voice was low but charged with annoyance.

“More than I wanted to see.”

“And I’d rather not say until I’m sure.”

“Look, Dom, I don’t know what you’re thinking, but I’ve known Fred for years.  He wouldn’t hurt a fly.”

John’s head jerked toward Dom.  “What does that mean?”

Dom ignored John’s irritation.  “Look, I have a funny feeling that Fred had a few more parts left over from his project.  Any idea where he might put them?  Somewhere quite private, I would think.”

The question made John pause.  “Well, come to think of it, he hauled some stuff out on a trailer last year.  I don’t know where.”

“What was on the trailer? Big things?”

“Gee, I dunno.”  John scrunched up an eye, trying to remember.  “There may have been a tarp over it.  So what?”

“North of town, out in the sticks.”

John stopped, looked at him suspiciously.  “To his house?  I don’t know about that.”

“You’re that serious about this?”

“Trouble?  What kind of trouble?  I heard she was in the hospital.”

Dom’s head turned toward him, surprised.  “What?  Why?”

Dom started to speak, stopped.  “Look, John, whatever her troubles are now, they’re about to get worse.”

John looked at him carefully, finally shrugged and said, “OK.  I’ll go, but whatever you think this is, you’re gonna have to prove it to me.”

They jumped into John’s truck, crunched down a gravel road toward Fred’s place, finally stopped at a dusty intersection, within view of the house.

The house was forlorn, its boards faded and cracking.  Behind the house, a barn and small pasture, backing up to a dense woodlot.

Dom stared for a minute, finally spoke.  “I assume Fred’s the kind of man to take risks for money?”

“Well, no,” John said.  “I wouldn’t say that.  He doesn’t seem too concerned about money.  Just look at his house!”

Dom ran his fingers slowly over his whiskers, nodded.  “There’s that.  I wonder if I’m mistaken after all but…, no, I don’t think so.”  Dom spoke in a low voice, as if he were talking to himself.  He sat up and tapped his finger on the side window, pointed behind the house. “That woods…  Turn down this road.  We’ll walk in from there.”

They rattled down the road, beside a ditch that grew thicker with weeds and finally glimmered with a layer of fetid water.

“Great!” John groaned.  “The mosquitoes will love us.”

“There,” Dom pointed, and John steered off the road, onto a weedy two-track path that led into the trees.  They pulled ahead a few yards, hiding the truck in the trees’ shadow, and got out.

The wood was silent, except for the buzzing of insects.  John turned up his collar, pulled on a baseball hat, and said, “So, what are we looking for?”

“I saw a path that led from the house back toward these woods.  Let’s find it.  We’re looking for a scrap heap, specifically, one with airplane parts.”

They waded through underbrush, waving away insects, tracking generally toward the house.

“Ak!”, John growled, his feet sinking into the marshy ground.  “What the heck are we doing here!?”

“Shouldn’t be much further,” Dom replied, smacking his neck.

The ground grew firmer, and they finally emerged from the thicket near an overgrown trail. Ahead, the gloom fractured into light and shadow. They continued along the path and felt the air begin to stir.  One hundred yards before the end of the woods, there was a shallow depression and, within it, the fuselage of an airplane.

“How did you know this would be here?” John demanded.

“I didn’t know.  In fact, I didn’t think it would be here.  I thought it would be in his barn, but this was an easier place to start.”

The windows in the fuselage were smashed and John approached to look inside.

“Careful, there may be hornets,” Dom warned.

“But no bodies?” John replied, sarcastically.

“I want to see the wing — there should only be one — and the tail.”

John pointed.  “OK, well, there’s a wing laying next to the fuselage.  And there’s only one,” he said, bending over it, “unless the other one is buried.”

Dom walked behind the tail, started to stretch out his leg to tamp down the grass beneath it when he suddenly jumped back.  “Ugh!”

“Just a little one”, John laughed, as the snake slithered away.

Dom gathered himself for a few seconds before returning to the tail.  He grabbed the horizontal stabilizer and found that he could rock the entire tail up a few inches, out of the grass.  “Here!”, he exclaimed, looking down, “Look! There’s no….” Dom hesitated, distracted by a loud whiz and twang near his head, followed by a roar from the direction of the house.  He ducked, caught John’s eye and shouted, “Run!”

A second gunshot clanked into the fuselage as John and Dom crashed through the brush, back toward the truck.  “Go!  Go!  Go!  Keep right, near the road!”  Dom tripped on a limb and fell heavily.  He pushed himself away from the moist earth and looked back, saw a flash, heard a bullet thunk into a tree over his head.   John grabbed his arm and yanked him up, both of them splashing and wobbling forward, tearing through brambles, searching frantically for the truck.  Finally, they spotted it, stumbled ahead, and dove in.

Dom, panting, stared into the woods as John fumbled with his keys.  The truck whined and then roared, spun backwards down the path, swerved crazily onto the gravel road, sped away.  After a few miles, when their breathing had slowed, Dom said, “It’s OK.  Slow down.”

“What’s going on?” John shouted.  “Did you know that might happen?”

“Just get us to the airport, right now, in case Fred is still there.  No, wait!  Better still, pull over!  Call him.  Ask for one of the  guys’ phone numbers, or something.”

“To see if he sounds winded or excited or angry.  To see if he’s the guy who just tried to kill you!”

Fred did not answer his phone.

John and Dom continued to the airport and pulled up to Fred’s hangar, but found the doors closed and locked.

“Good grief!” John cried, dragging his soggy shoe against the pavement.  “What did you get me into?”

“You were there.  What do you think?”

“How should I know?  Except — if that was Fred, he sure doesn’t like trespassers.”

“So, you see, he will hurt a fly, at least to save his own neck.  Look, drop me at my airplane and then get out of here.  Until you hear from me, do not come to the airport alone!”

John stared at him, finally nodded.  “OK… What are you going to do?”

Enjoying the story? Please subscribe to be notified when the next chapter is released.