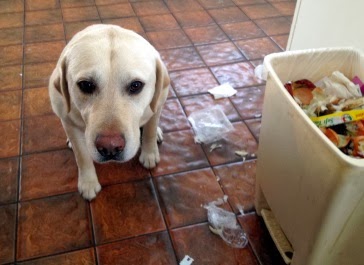 Ranger looks up, startled by my unexpected arrival.  He meets my eye, drops his head, slinks away.  Plastic wrappers and scraps of paper are scattered around the trash can where he has been foraging…again.  I am angry for a moment and then, for the hundredth time, I see in this sneaky, thieving dog a strong resemblance to…me.

Ranger is a rascal.  He understands, roughly, his master’s plan and he tries to be good but, well, it’s just hard.  His sinfulness, and mine, came to mind as I was reading this morning in the book of John, who says that Jesus was “full of grace and truth”.  My ears perk up when I hear “grace”, for I am about as good a man as Ranger is a dog, but the word “truth” brings to mind a long, sad list of trash cans I have raided.  I drop my head and say with Paul, “I have the desire to do good but I cannot carry it out”.  What I want to do, I often don’t do, but the things I hate, I often do.
In the battle between grace and truth, I’m clearly rooting for grace, but when I look at Jesus’ life I can find no battle between grace and truth, not even an indication that they are separable things.  To those he heals, he says “your sins are forgiven”, “stop sinning” or “offer the sacrifices that Moses commanded” – all sober references back to truth and obedience, and this is not surprising given his insistence that “not the smallest letter, not the least stroke of a pen, will by any means disappear from the Law until everything is accomplished”.  Jesus, full of grace, is simultaneously full of truth.   As C.S. Lewis observed after comparing the words of Jesus to those of Paul, “All the most terrifying texts come from the mouth of Our Lord”.
In what is, for me, the difficult climb of obedience, it seems that grace and truth work together.  Truth tells me where I am, relative to the path and destination.  Grace calls out, encouraging and comforting, reminding that the climb is possible and worth making.
Grace is not a helicopter, reducing the need to climb, and it is only a comfort so long as I am sincerely trying to climb.  A voice that comforts me in my longing to descend is not grace.  A voice that commends my current position as high enough is not grace.
Likewise, a voice that condemns me because of my current position is not truth.  A voice that shouts over the encouraging message from grace is not truth.  A voice that says I have fallen too far or too often to be redeemed is not truth.
Sometimes we talk as if grace and truth are divisible, as if either one could stand without the other.  I recognize and share one anxiety that motivates this view.  For many years, the fundamental teachings of Christianity have been mildly endorsed in this country, or mildly ignored.  That  seems to be changing; the Christian who defends the teaching of scripture now pays a price, even if he tells that truth gently and with love.
How much safer it would be if we could pick and choose what Christianity means, or if we could reduce the burden of truth by increasing our emphasis on grace.  How much more attractive Christianity would be if we could quietly expunge unpopular doctrines!  How much easier Christianity would be, even for its followers, if grace could soften the hard edges of truth.
Yes, “the truth hurts”, but if my own soul is any indication, it is not so simple as that.  It is not being in the wrong that hurts, nor even having others say that you are wrong.  The hurt comes when you find yourself privately agreeing with your critics, when your own soul rises up to accuse you.  “God’s kindness leads us toward repentance.”  It is his refusal to condemn us for what we have already condemned in ourselves that allows us to finally let go the defenses that we erected against truth, to surrender to the sweet truth of forgiveness.
The truth hurts, but not so deeply as it heals, and it is the role of grace to lead us to truth.  Grace that leads anywhere else is not grace, and truth that is not permeated by God’s love is not true.  Grace and truth are complementary and indivisible; to surrender either one is to lose both.